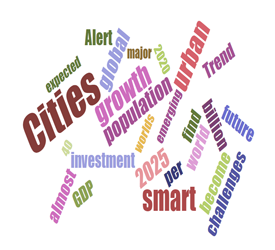 This is the second in a new type of Trend Alert almost entirely generated by our artificial intelligence algorithms. Please add comments in the 'Forum' below the Alert with your views on how you are finding it and suggestions for improvement. We are grateful to Jeff LaFrenz, Zulfana Bagum, Dan Abelow and Iwona Roslonek for their suggestions from last week: all now implemented.

Learn more
To find more resources on Shaping Tomorrow about the future of cities some of which were used in this Trend Alert. View Cities report.
Also, click here to find out how Shaping Tomorrow can help your organization rapidly assess and respond to these and other key issues affecting your business.